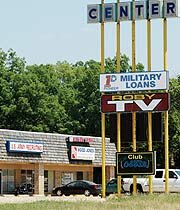 A Fort Drum Military Reservation board, whose responsibilities include heading off predatory lending practices, didn't even meet for four years.

That's according to documents from the U.S. Government Accountability Office, a television crew in Watertown, N.Y. (near where the base is located) reported Monday.

In 2004, the New York Attorney General filed suit against N.Y. Catalog, a business located right outside Fort Drum. The lawsuit alleges that the agency was issuing payday loans, charging outrageous interest rates and targeting military families as the primary victims.

"Our report did in fact talk about Fort Drum as being one of several bases where we had seen, inactivity I guess is the word," Melvin said. "And at Fort Drum in particular we had noted that the board had not met in about four years at the time of our review."

Melvin said that the Department of Defense, in response to the GAO report, planned to implement regulations requiring the boards to meet more often. This is the latest in a series of stories on military payday loans and the efforts of regulators to curtail them. Officials at Fort Drum's Public Affairs Office did not on whether the board had begun meeting since the report was issued.