The Idaho State Senate has approved new legislation which requires any payday loan company doing business in Idaho to be licensed to do business in the state of Idaho. END_OF_DOCUMENT_TOKEN_TO_BE_REPLACED 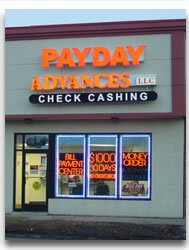 Regular and no faxing payday loan lenders know that it often takes naive borrowers a long time (and lots of fees) to figure out a simple fact:

If you didn‘t have enough money this week, you probably won‘t have enough to pay them back plus cover your other bills within a two-week period. In fact, they‘re willing to bet their business model on it.

Payday cash advance lenders count on you to roll the first loan over again, and again and again. The small fee that you were initially charged for the first loan quickly adds up to a hefty amount that is actually larger than the original loan. And they cash in on your financial misfortune.

Roughly 10 percent of all payday loans are made to people ages 18-25, according to, Vicki Jacobson, president of the Foundation for Credit Education in St. Louis.

OK, maybe you went over-the-limit on your credit cards and haven‘t paid your cell phone bill in two months. Maybe you‘ve just found yourself in an uncomfortable situation with your creditors that you need to resolve quickly.

Don‘t panic. The important thing to realize when you‘re in a tight financial situation is that “if it can be fixed with money, it isn‘t really a problem.“ That might seem trite and easy to say, but coming from a former debt-strapped college student, this article knows how you feel.

Here are some alternatives to borrowing from your already stretched paycheck with a cash advance:

- If you have never been late or over-the-limit on your credit card before (or at least not in the last six months), contact the credit card company and ask for a waiver on your monthly payment. You‘ll still incur interest charges but the extra breathing room could help relieve the pressure.

END_OF_DOCUMENT_TOKEN_TO_BE_REPLACED

A recent editoral in The Idaho Statesman doesn't blame JUST payday loans for the record number of residesnt filing for bankruptcy. But it doesn't exactly defend these resources, either.

Here it is, paraphrased:

One problem is a state law that allows storefront and online payday loan lenders to charge whatever interest rates they can get from consumers. Politicians cannot legislate common sense and frugality. However, they can and should cap interest rates and protect consumers.

As Idaho has lost good-paying manufacturing jobs and replaced them with lower-paying service jobs, many Idahoans are staring at too much month at the end of the money:

• They filed a record 9,660 bankruptcies in 2003. That means one of every 55 households filed for bankruptcy protection.

• They are failing on their home mortgages in increasing numbers. Foreclosure rates averaged 12.2 per thousand in the first three months of 2004, up from 9.4 in 2000.

• They have used their plastic - a lot. The average household is carrying $10,000 in credit-card debt. It's little wonder why use of cash advance loans has grown in the state.

• They have fueled a demand for payday and auto-title loans - short-term and high-interest transactions. The state had 318 payday and title-loan lenders in June, nearly double the 162 in the state four years earlier.

While payday loans and title loans account for only one-tenth of a percent of Idaho consumer loans, business is growing. Outstanding loans totaled $8.3 million last Dec. 31, up from $7.6 million three years ago.

The laissez-faire Idaho Credit Code, passed in 1983, replaced laws dating back to 1957, which capped interest rates. The Credit Code - billed as a way to "simplify, clarify and modernize" credit laws — bans only "unconscionable" loans. But as House Business Committee Chairman Max Black, R-Boise, points out, the law does not define unconscionable.

A judge must decide if the interest rate is fair, if the no fax cash advance lender was honest and if the borrower was competent to sign on. All that also assumes someone files a lawsuit.

The credit code works for consumers because it allows savvy shoppers to find the best interest rates, said Gavin Gee, director of the state's Department of Finance. Before 1983, lenders pushed to the maximum rates allowed under usury law, rather than offering lower rates to entice business.

END_OF_DOCUMENT_TOKEN_TO_BE_REPLACED

The Payday Loan Times Police Blotter is at it again …

In Boise, copy are looking for a man who robbed a payday loan company this Saturday morning.The man walked into Nice 'n Easy Payday Loans, 328 N. Orchard St. around 11:30 a.m., showed a small silver handgun to a clerk and demanded money, police said.

The man fled on foot with an undisclosed amount of money from the quick payday loan operation. The robber is described as 25 to 30 years old, 5 feet 8 inches to 5 feet 9 inches tall with an average build, short hair and a brown goatee. At the time of the robbery he was wearing a dark blue baseball cap, large frame sunglasses, a red T-shirt, and blue jeans.