Considering the allegations surrounding Congressman Geoff Davis - such as the claim that his objected to the proposed military payday loan amendement is corrupt - it's a good thing he's chosen to speak up.

Davis, an Army veteran and freshman congressman from Hebron, has been criticized by consumer rights groups for opposing a 36 percent cap on payday loans.

But he called the idea "knee-jerk legislation" to The Cincinnati Post, saying the 36 percent cap would drive payday advance lenders out of business and send customers into the arms of other predatory lenders whose loan amounts aren't limited to the typical $500 and $700 maximum of cash advance providers. 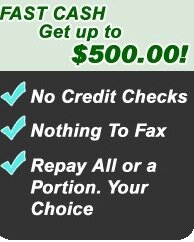 Installment loan lenders, for example, can deliver personal loans for as much as $5,000 to individuals who typically end up rolling over the loan, generating more interest, because they can't afford to pay it back.

A real payday loan alternative: Davis spokesman Justin Brasell said the congressman's proposal would allow payday cash loan lenders to charge the fee they are charging up front now - about $30 per $200 on a two-week loan, which rolled over through a year would calculate to an annual interest rate of 390 percent - but would prohibit companies from rolling over the loans if the customer can't pay.

In such cases, Davis' measure would require lenders to set up customers on a six-month payment plan with an interest rate capped at 20 percent annually, Brasell said.

Consumer rights advocates say they don't dispute there are flaws within the installment loan industry, but that isn't a reason not to rein in payday advance loan businesses while they can.

"There are problems in the small installment loan market as well," said Jean Ann Fox, spokeswoman for the Consumer Federation of America, a group that has been pushing the amendment Davis opposes."A 36 percent rate cap as the outside limit, that may be high but that certainly is a vast improvement over 390 percent payday loans."

The issues are part of the annual spending bill for the Department of Defense. A conference committee made up of House and Senate members, including Davis, is debating his proposal, along with the amendment he opposes.

Beyond the interest rate issue, Davis said his proposal calls for other regulations to curb predatory lending to military personnel, including:

The reason things get trick is because faxless payday advance lending executives have given Davis $11,450 for his race this year against Democrat Ken Lucas, according to an analysis by the Center for Responsive Politics.

Brasell said he expects the issue to be resolved this week.